To write about this blog’s themes of food, family, farms and friends we really have to start with our decision to move to Tasmania. The first thing you find when you make that decision is the reaction of others, which is usually along the lines of “you’re so lucky, I’ve always wished I could do that.” It’s like a collective Australian dream. Mind you it’s not just Australian, when I talk about living here to people as I travel around the world, most people respond with some combination of admiration, longing or envy.

Now Tasmania really is a great place to live and to visit, and you’ll read plenty about that here. But the strength and consistency of people’s response suggests something deeper is going on – that many people long for something that Tasmania symbolises to them. So I thought that would be a good theme to explore in our first post.

As I’ve written about in the introduction to Green Apple Isle, this process started when my second son Asher and his partner moved here 8 years ago to explore their love of food and art. Slowly but surely others in the family followed until critical mass made it self-reinforcing. First my wife Michelle and I came with and our three young kids, then my brother and his family, then my oldest son Callan and his wife, then my 83 year old mum conceded defeat and followed. When Callan and Irene had their first child we had our first Tassie born member of the family and four generations on the island. 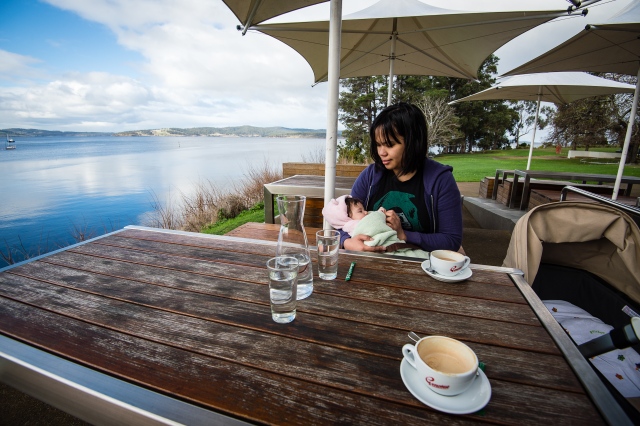 Coffee at Peppermint Bay (photo by Callan Back)

For Michelle and I, moving our family to what by most measures is an isolated part of the world was a big decision. Australians are used to being a long way away from the rest of the world and most of us are pretty happy about that. But to move to a small farm an hour south of Tasmania’s capital city Hobart was taking “a long way from the world” to a new level. We are just 60 kms as the crow flies from the southern tip of Australia and that makes very real the idea of living “down under”! Sure Antarctica is a lot further (fortunately for our efforts to grow food) but there’s really not a lot of human activity south of here.

So given all that, it really surprised us how fast we made the decision to move and how soon we felt completely at ease. A few years later we noted that neither of us had felt a moment of doubt since arriving. It felt like coming home.

What’s that about? What is it that we collectively long for that this place represents? You have to start the answer with the sheer beauty. Many parts of the world have wonderful scenes and places of beauty, but it feels like Tasmania has nothing but them. Everywhere we go we feel surrounded by it. Whether it’s extraordinary natural wonders like old growth forests, snow capped mountains or waterways that sparkle in the sunrise, it’s hard to avoid the feeling of peace that such beauty builds in your heart. I think often of how extraordinary life must have been for the Aboriginal people who lived here for so many thousands of years, with their rich culture and stable coexistence with the natural world. 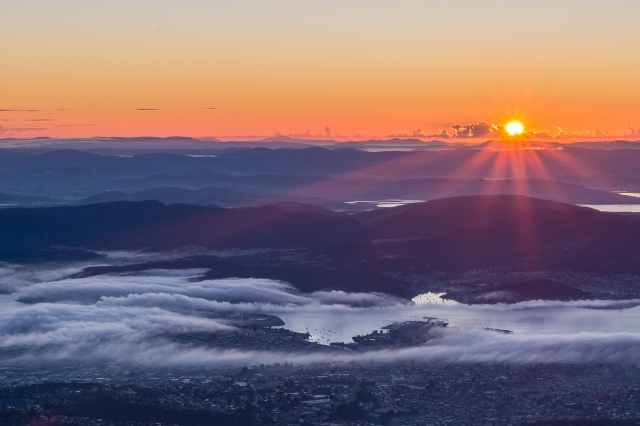 Sunrise over a foggy Hobart city, taken from kunanyi / Mount Wellington (photo by Callan Back)

And it’s not just natural beauty, but human as well. The quaint farmhouses nestled in green fields, the vineyards winding over rolling hills, the amazing array of wood piles, often built into things of beauty meandering along fence lines or shaped into rounds of stored heat, ready for winters to come.

Then of course, there’s the food! Partly because you’re surrounded by it growing every day, food here feels real in a way I’ve never felt anywhere else. You observe the cycle of the apple orchards, you notice the baby lambs the day they are born, you see the tomato bushes racing up to capture the summer warmth and you look longingly as the blueberries start to ripen. You see how fast baby pigs get big, how everyone has broad beans at once and you say hello to the baker as he walks by you in the street. Sure, all these things are elsewhere as well but here they’re everywhere. Every shop seems to sell some local something, the roadside stalls provide whatever’s in season, the butcher makes his own bacon, while jam, chutneys and preserves abound. So food production isn’t something you go to see or experience, its just part of your everyday life. 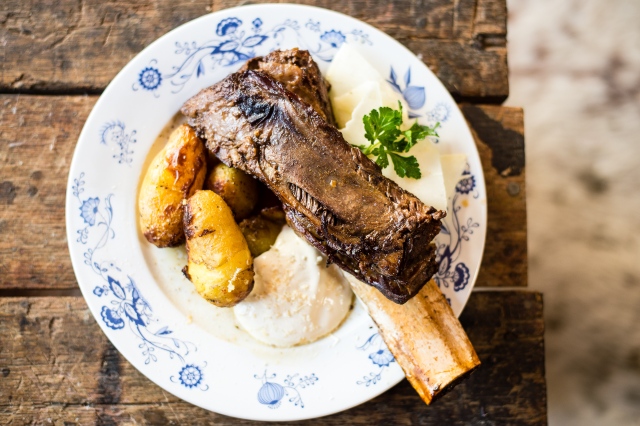 Beef ribs at The Apple Shed (photo by Callan Back)

The other thing that surprised us is how comfortably different groupings of Tasmanian’s live together. Tasmania has a dynamic recent history of conflicts over environmental protection but is now seeing a rapid transformation to an economy built on food production, education, niche manufacturing and a tourism industry that leverages food, wine, nature and culture. This means there are multiple “economies” coexisting, some in decline, some growing fast. Sure there’s conflicting views about these issues like in any community but on the ground people live together surprising well and the community is incredibly welcoming to “outsiders” i.e. everyone except those whose parents at least were born here! (Of course that is, in itself, a funny idea given all non-Aboriginal people here are outsiders with the first having arrived just a few lifetimes ago.)

So life is good here. Someone described it me as “like life in Australia was 30 years ago but in a good way”. Not backward but slower, more relaxed and I think more interesting. People say hello in the street, leave their houses unlocked and the car keys never get lost because we leave them in the car. People swap stories about growing this, building that, finding a great piece of timber, renovating an old fireplace. They tell you that Sam’s pigs are almost ready, Cam’s bread was really good this week and that Sue’s tomatoes were incredible this year.

So now we call ourselves Tasmanians. We acted on the search for the good life, acted on the collective dream. Now we’ve woken up and found it is real.

5 responses to Living the dream